Blog Tour: The Wig in the Window & The Character of Names with Kristen Kittscher

I am so excited for MPB to be a part of this blog tour! The Wig in the Window is right up my alley.

How fun it is for me to give a peek into how I named my characters! 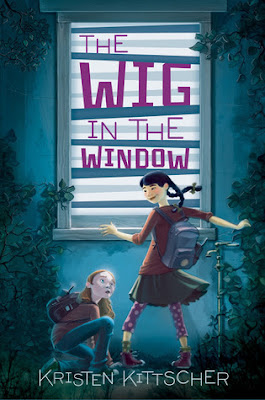 THE WIG IN THE WINDOW is about unlikely best friends Sophie Young and Grace Yang, two seventh graders who’ve made a game of spying on their neighbors. But when they stake out the home of bizarre local middle school counselor Dr. Charlotte Agford (aka Dr. Awkward), they stumble across a terrifying scene. At least, they think they do. The truth is that Dr. Agford was only making her famous pickled beets! But when the counselor begins acting even weirder than usual, Sophie and Grace become convinced she’s hiding something—and they’re determined to find out what.

Soon the girls are breaking secret codes, being followed by a strange blue car, and tailing strangers with unibrows and Texas accents. But as their investigation heats up, Sophie and Grace start to crack under the pressure. They might solve their case, but will their friendship survive?

Young & Yang, like the yin and yang their names suggest, are two near-opposites who are at their best when they balance each other. Grace Yang is bold, impulsive, creative—and the chief instigator of the sleuths’ neighborhood spy missions. She’s all yang, and, of course Sophie is all yin. She’s more cautious and less sure of herself, especially at the story’s start. Grace’s boldness inspires her, but she also struggles to rein Grace’s wild imagination in.

Though Sophie Young is the first-person narrator, funnily enough I didn’t name her for quite some time – I kept changing it! (I’ve saved some of those other names for characters in future books.) Grace Yang’s name came to me easily; it seemed perfect for her impulsive, energetic character. It helped that one of my own childhood friends I had dabbled in neighborhood sleuthing with had the last name “Tang.” It wasn’t until about a quarter of the way into my first draft that I realized that my protagonist was counterbalancing that energy. She had to have the last name Young!

I worked out her first name, Sophie, with a little more effort. I chose Sophie for its “wise” Greek root. Sophie Young: wise and young. It was perfect for a precocious character who fluctuates between being wise-beyond-her-years and quite immature – and the perfect representative of the in-between-ness of the middle grades when one minute kids are playing with stuffed animals, and the next they’re wrestling with philosophical questions.

My antagonist’s name, bizarre middle school counselor Dr. Agford, came to me fully formed in a flash and never changed. There was something about the hardness of the “Ag” that seemed nasty, buffoonish—and a little bit grotesque…just like she is! I liked that it sounded like it could be made up (as Sophie speculates at one point, it looks a bit like someone lopped of the first few letters or like it could be an anagram for something), even though it seems close to common last names. As it happens, the last name doesn’t appear to exist at all. It was an extra bonus later when I realized how lent itself to the perfect nickname for her: Dr. Awkward.

I had a great time naming characters I only mention once or twice, too. Take, for example, the fictional pop star that Sophie idolizes, Kai Li. How handy that my German husband has a name that could also be Taiwanese…

Thanks for stopping in to find out more about THE WIG IN THE WINDOW! Hope you enjoyed this little peek behind the scenes. WIG doesn’t go on sale until June 18, but you can pre-order from your local indie, Barnes & Noble, or Amazon already.

Perfect for fans of The Mysterious Benedict Society, The Wig in the Window is a smart, funny middle-grade mystery with a Rear Window twist. 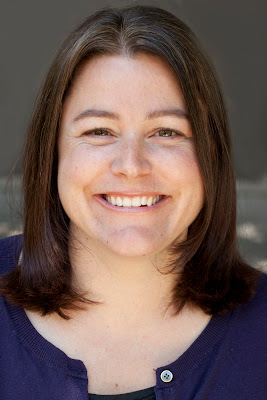 "Kristen Kittscher was a child neighborhood spy but (allegedly) grew up to be an upstanding citizen and middle school English teacher. A graduate of Brown University, she now works as a writing tutor in Pasadena, California where she lives with her husband, Kai, and their hyperactive lab mix. The Wig in the Window is her first novel. Visit kristenkittscher.com to investigate more about her and Young & Yang's next adventure, The Tiara on the Terrace."