As it is Children's Book Week, I felt it was the perfect time to celebrate! 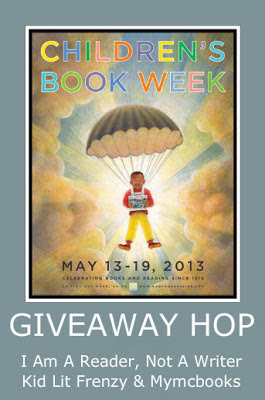 Celebrate what, you may ask? 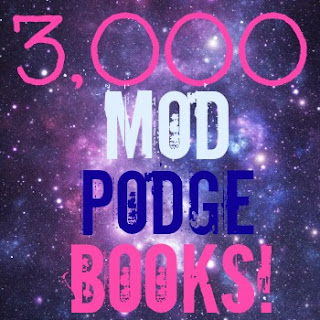 So here's to all of you! Yes, you! Over there! With your nose in a book!

My readers, first and foremost, are to be celebrated. You now number just over 3,000 in less than three years. That's so crazy/amazing/unbelievable/beautiful/heart-flutteringly brill.

And now for some people and organizations who I'm thanking with the prizes available for YOU to win!

A big thank you to Walden Pond Press & Kit Grinstaff, both featured in the MG prize pack. 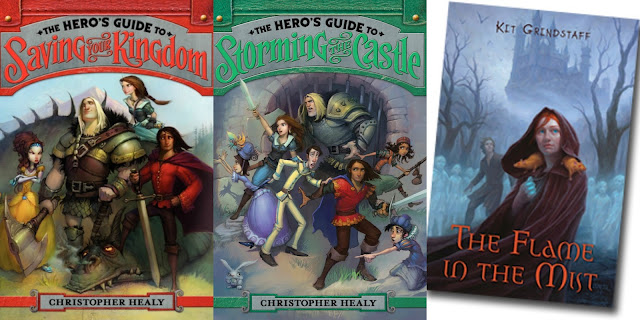 Walden Pond for the wonderful relationship they've cultivated with bloggers all around the 'sphere, and specifically to Kellie, for being my MG supplier. I often need a fix.

Kit Grindstaff for taking a chance on Mod Podge Marketing. Kit was technically my first author to fly under the company's official banner, and I will never thank her enough for that.

And now to celebrate two of my favorite authors, and favorite friends, from the debut class of 2010, Lauren Destefano & Michelle Hodkin. 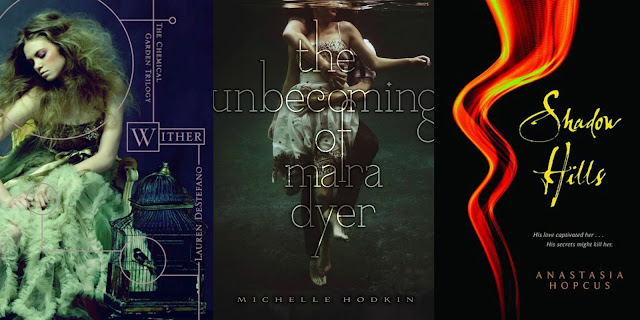 Lauren & I are in a band with Dia Reeves. It was formed on Twitter, sadly has never made a public appearance, and is, most likely, an urban legend, but still.

Michelle, oh, my dear Michie. Told you that you rocked harder than Taylor Lautner's abs! Wait, what?

This Shadow Hills poster was sent to me the year Mod Podge first hit the scene, 2010, and I've saved it for a very special moment, like this one.

Now here's an interesting stash. Two 2013 debuts, and one novel by a familiar author. 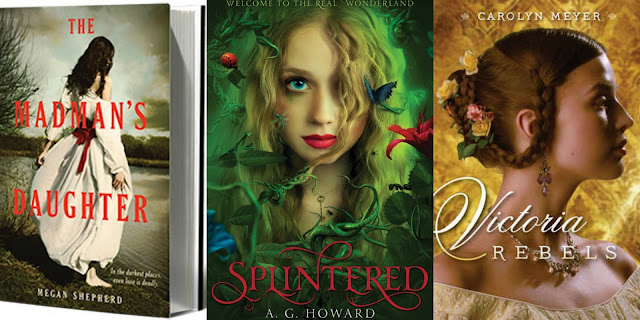 I've said it before and I'll say it again. Carolyn Meyer is one of the top five reasons you're reading this blog today. With my mother's unwavering vocal chords as she read to me-- doing all the voices-- since I came home from the hospital being number one, Carolyn is a very likely runner-up for my love of the written word. I've been reading her books since I was in primary school and now I'm all "growed up!" Being able to partner with her here on MPB remains a pinch-me sorta deal.

A.G. Howard, author of Splintered, is one of my very bestest and I am pleased to call her Anita and friend and 'Hey, you!,' whatever'll get her attention fastest.

The Winter in Wonderland: 12 Days of Splintered blog tour proposal won over the folks at Abrams/Amulet and the official blog tour note you can see on the back of this ARC refers to a Mod Podge Blog Tour. That was a huge milestone for me and for all things Mod Podge!

And representing HarperCollins/HarperTeen, a stoic supporter of MPB through all its various imprints, is The Madman's Daughter, the debut EVERYONE wants to read, and rightly so!

Thank you to everyone involved in any way with 3,000 Mod Podge Books!

Enter to win one of these three prize-packs below:

You've been one of the first few bloggers I've started blogging. :)

Oh man, I know it was a blog tour, but I can't remember which one. Just keep doing what you're doing, because it's great! :)

I don't remember when but I know it's been around 2 years. It's hard to pick a favorite event because they're all so great!!! Congrats :D

I just became a follower now, but I'm looking forward to good things to come!

That's quite a giveaway! I've been following so long I don't remember...

Congrats!!!! I discovered the blog this last year. I love it! Thanks so much for the fun posts and great reviews!

I've only been following for a few weeks, so I can't say what my favorite event is! But I love all your reviews that I've read so far. :)

I am a new follower but I am looking forward to many great things from you. Thank you for the amazing giveaway!

Oh, it's probably been around a year, maybe a little less! I love your bookish vlogs and I wish you could do them more often! They entertain me :D

I don't remember when I became a follower, but I've enjoyed my time, and I can't wait to help you celebrate 4,000!

I've been following you quite some time even before I became a book blogger myself, I was following you with my personal profile and then again with my book blogging one.

My favourite events ~ the blog tours! I've read some fantastic books that was toured on your site. I also would love to become a tour host for your tours :D

Not sure when I started following but your reviews are what brought me to your site.

i just started following you a few weeks ago i think. i love your blog and all the books i can learn about! without blogs like yours i wouldn't know what to read sometimes! your blog makes it easier to decide! thank you! :) :) :)

This is awesome guys! I am a new follower who is loving your page!

Hmm at least a year. I don't know what my fav post/event was - AHHHHHH are you trying to explode my brain?
I'm totally feeling that MG prize pack what what!

I need more snark and insane mind dribblings before you hit 4k. yes that is what we need!

I discovered your blog last year and have loved all of the events! Don't really have a favorite! Love all of the great giveaways the most;) Thanks!

I just joined the site. found you through the hop. So I am not sure what I most look forward to. A shring of some great books :)

Hey, nice site you have here! Keep up the excellent work!
Estetik

I've only been following a few months, but your reviews are what brought me here. I can only aspire to review books as well as you do :)

I must admit, I haven't been following along for years, but for good reason! I just started blogging in January but quickly found you :) Thanks for this awesome giveaway! 3,000 followers is a crazy amount. Hopefully one day I can be hosting a giveaway like this, too!

I am looking forward to more amazing and fun Mod Podge Posts and Reviews. And giveaways, of course!

It has probably been about two years, discovered your blog (and at least a hundred other book blogs) through a book blog hop and I have been around ever since.

Now, what day did I become a Mod Podge reader? Oh, now I remember--today!

I remember very well first contacting you about hosting my blog tour! I'd seen you were hosting a fellow Lucky 13s author, Cat Winters, and so you and I started chatting...And yay for that! Of course, my blog tour with MPM has been my very favorite event.

And now, this giveaway...Wow! I just had to enter even tho' Flame is in the prize pack. If I win, please give it to the runner up! (yup, I have kind of read it before, just a few times:))

I remember very well when I first contacted you about hosting my blog tour! So glad I did. Needlesss to say, that's been my favorite event so far. Loved it!

...and now, this incredible giveaway. I just had to enter, even though Flame is part of the prize - If I win, please pass it along to the runner up! (Yup, I have read it. Just a few times:))

I started following you for a giveaway hop!
I like giveaways but I also like reviews about books I've read!
Thanks for the giveaway!

It's been a few months since I started following Mod Podge Books. I love reading your book reviews. :)