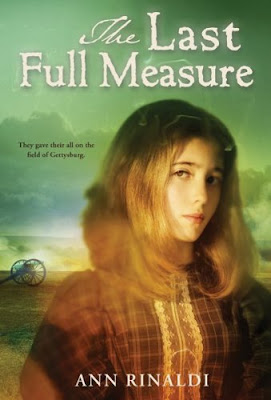 
Tacy is a young girl living in the town of Gettysburg, Pennsylvania during the Civil War. Death is literally at her doorstep as she tries to protect those it might claim.

I love Ann Rinaldi. I love, love, love, love, Ann Rinaldi. She is, in my own words, the bomb dot com. The Fifth of March and Time Enough For Drums are two of the most incredible books I have ever read on the Revolutionary War, they really are. That is why I was so surprised by her latest book, which lacked the spirit, tenacity and sense of sacrifice I have come to know and love from Rinaldi.

The problem, I believe, lies in the heroine. If the story had been written from David and Josie’s POV the book would have taken a more spirited turn. Unfortunately, the story was narrated by Tacy, a young, sometimes I felt too young, girl who is too wrapped up in her own troubles to illustrate the carnage of the battlefield, or the pain of self-sacrifice.

I didn’t believe in Tacy, I was not drawn to her character, or to her story. She was too much of a wallflower until the last thirty pages or so, when the character began to shine with the vibrancy I was yearning for from page one. David, on the other hand, I felt for. He was the one making choices, hard choices, stupid choices, choices with odd motivation, choices based in love. He was where the heart of the story lay, but, of course, I was stuck in Tacy’s mind and David’s heart is barred. And he was the character who fell in love, Josie was the sordid object of his affection, I wanted to know about them, together, separately, pre-battle and post-battle. I am mournful that I had to read ‘The End’ without getting the chance to walk through those dark days with them.

The second problem can be summed up quite nicely, “Don’t you people know there’s a war on?!” I could not hear the ring of cannons, could not smell the stench of blood, didn’t know the feeling of terror, in fact, I felt completely ambivalt to the war. War? What war? The battle, especially this battle, should have been a character in and of itself, but it barely read like a setting. I was so disappointed, I didn’t learn anything new and when I finished reading my heart did not rest in the past, considering fallen soldiers, or the sadness of my country’s Civil War. That is a big thing, I am very empathetic, particularly while I am reading, to be so blase about this book spoke volumes.

Notes on the Names: Great names, though I kept confusing Jennie and Josie for the first thirty-or-so pages, since they were both David’s love interests and the sounds are similar. Tacy’s family are- Brandon, Joel, David and Tacy. I loved the reason Tacy’s father named her what he did.

Thoughts on the Cover: I really don’t like this cover, but it does portray the book well. The visual is a girl, with an impassive expression (some crazy hair!) looking toward the reader, the battlefield and a single cannon in the distance, barely a blip on the radar.

P.S. Usually I can gather what a title is trying to say once I read the book. But for the life of me, The Last Full Measure isn't connecting any dots, what about you?

Posted by Gabrielle Carolina at 12:59 PM