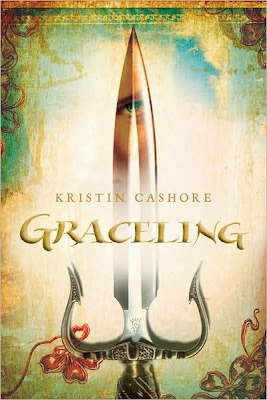 In this land, it is a curse to be Graced.
My review:

Gollywow, geewiz and all that jazz! This form of book is so very rare; a fairytale land without magic, without dragons, or paranormal creatures, but filled to the brim with epic adventure! I love it! This book was on my radar since before it was published, the name, Graceling caught me first, I really had to know what that was, and then the cover, ohmygosh, the cover! So unique, something special and personal, this cover fits’s the story like a glove.
Now, I know I’m raving about pre-reading, but that’s because opening the book was nothing like I expected! This is an amazing author, truly, I will buy any book she writes from here on out (I have and old ARC of Fire and Bitterblue is poised to release this spring; the books are being called “The Seven Kingdoms” and I hope/pray/wish for that to giveway to seven books in total!) unless of course, she writes about Zombies, which is my buzz word.
Her characters are original, that’s it in a nutshell, she has original characters who make unusual decisions in this unique world. I’m trying to tell you, this book is nothing like anything else on the market right now! And now having said that, I will say that the Seven Kingdoms series will appeal to fans of Suzanne Collin’s Hunger Games and Shannon Hale’s Book’s of Bayern.
Katsa and Katniss would be best buddies, I think Enna might get along well too!
This heroine is kick butt, she is rock hard awesome, slightly harsh, but in a way that makes you pity, not hate her for who she is. The supporting character’s are all so thorough, Bitterblue winning whatever award you want for best protagonist under ten. Po is so effortless, his character must have come together like utter clockwork, he is consistent and kind, while still being able to match Katsa when it counts!
I really can’t rave any further, well, I could, but it would look rambly, and I hate when bloggers get rambly, but I hope you got the message- read it!
Thoughts on the cover: Best cover, such an amazing cover; I only have the ARC of Fire and what I wouldn’t give for a hardback of it, just to be that much prettier on my Mod Podge Bookshelf! I hope that the covers to come remain consistent, I really hate that The Books of Bayern series now has models instead of illustration; Kristin, don’t let that happen to your fabulous books! (though the UK cover is just as amazing!) 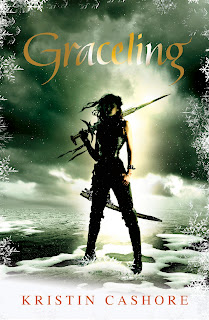 Notes on the Names: I swear, if people wouldn’t think I was a nut I would name a baby Bitterblue, I think it just rolls off the tongue and I squealed when I saw that the Princesses name was the title of the third book! I’m going to try very hard to get an ARC, I swear! Katsa reflects the character well, though I heard Catsup in my head! Po AKA Greenleaf, yeah, I’d go by Po as well. ;) Giddon, I kept reading Gideon, and so Gideon grew on me and is now on my list for boys names! I think Graceling deserves it’s own name note! What a great way to describe a skill, a Grace, you are a Graceling. Utter brilliance.
Personal Note: I am having surgery today, I pre-wrote the post, a month in advance, so I would know y’all would have something to read. There is nothing “wrong” with me, in that I am not sick, but I’m having a jaw surgery to correct a genetic deformity that makes it hard to breathe. It’s all internal and apart from being anxious (because who wouldn’t be?) I’m not upset about it. I’ve been waiting to do this since I was eight! If you could just think of me, that would be lovely! The next few posts will be pre-written and released, but I will be sure to write a personal post once I feel up to it! Thank you, all my lovely “page Turners.” P.S. if you want to buy me a get well present, books are well appreciated! ;)

Posted by Gabrielle Carolina at 5:54 AM

I love how your other persona as a writer is reflected in your reviews. It makes the reviews so much more interesting to read! I'm really sorry I didn't enjoy the book as much as you did but I have respect for it.