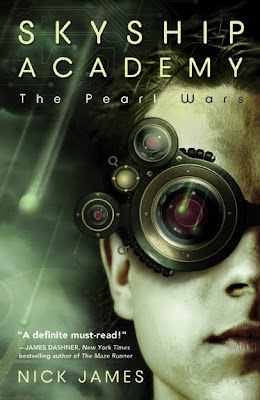 Read Time: This took far too long, not due to the book, but due to moving.

If Jesse Fischer and Cassius Stevenson know anything, it’s that Pearls run their world.

Jesse doesn’t know why he has the power to catch them, Cassius doesn’t understand the fire that burns around him, and neither one are prepared for the battle to come.

The Pearl Wars will test their loyalties, make them question who their true friends are, and will transform their self perception with the revelation of one major secret.

Are you ready to board the Skyship Academy?

So good. So, so good. I’m shocked by just how good this book is, and how greatly it appeals to me! James is a debut author, and a male. I point this out, because I have seen so many male authors be good with words, and bad with emotion in their writing. Nick James splits the difference and has delivered a powerful, consistent debut with characters you'll genuinely feel for. Skyship Academy is adventure, romance, an interesting setting, shady characters, secrets, romance, and everything in between.

I think the number one thing that made this book all that it is lies in the characters who are 100% authentic, unique and consistent. I am a bit flummoxed as to how continuous the characters were in their attitudes, and actions. Everything was “so Jesse,” or “so Cassius,” and you always knew which one you were dealing with.

The book is told in alternating POV, and this was my only, albeit, minor, problem with the book, Jesse’s story is told in first person present, where as Cassius’s chapters happen in third-person past tense narrative. I was hoping that maybe by the end of the book we would see why, but it’s not a question that is answered by book one.

I’m suggesting you buy this for the book lover in your life, boy, girl, doesn’t matter, I think everyone can enjoy and appreciate this work in the same vein as Westerfeld’s Uglies series.
Notes on the Names:

Asha is one of my favorite, under-the-radar, names and Nick used it! Obviously he has good taste and continues that trend throughout the book.

Thoughts on the Cover:

I have the ARC, which I love, because I think it best represents the characters, the setting, etc, but I agree with Flux, the new cover will sell better because it will appeal to a wider audience, whereas my ARC may only be noticed and appreciated by certain people if they haven’t first read the story.

Posted by Gabrielle Carolina at 3:09 AM

I've been mildly excited about this one, but your review settles it: I need to get my hands on this now. Thanks for the recommendation!

This looks really good, thanks for the review.

The publication on goodreads says tomorrow - I cannot wait to get a copy of this book. I entered their giveaway there - but I doubt I'll win. I will just have to buy this. I do love that ARC cover!!