Skyship Academy: Do you have what it takes? 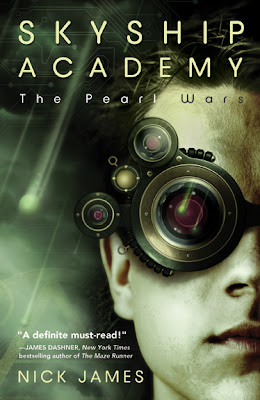 Welcome to release day! It is so exciting to be day eight on this blog tour! I loved this book, it's a 2011 favorite, and as a plus, Nick James is a sweetheart. I hope you will pick up his debut novel ASAP! If you want to purchase the book (and you really should) just follow the link: Skyship Academy: The Pearl Wars

To begin with, you can take the quiz that will tell you if you're Skyship Academy material, or if you should stick to the surface. The quiz is below, keep scrolling.

Then head over to The Book Smugglers for today's corresponding post!

If you've been following this tour since day one I bet you're looking for the link to the entry form, yes? It's right HERE.

If you don't know what I'm talking about, let me sum up for you:

Throughout the tour stops, there are 8 clues scattered on the blogs.  Make sure you go to every stop on the tour so you can find the clues. These clues spell out a secret coordinate and you need this coordinate so you can win on the last stop of the tour.

So do you want today's clue? Of course you do, you want the pearl more than anything. They're all that matters, after all.

CLUE #8: Skyship Academy: The Pearl Wars is told through multiple viewpoints, but how many? The number of viewpoints is also your last piece of the coordinates. Check out the Publisher’s Weekly review of the book to find the answer.

And finally, what you're playing for:

A supplemented copy of the book with a bonus Skyship diagram and bonus chapter or annotations. 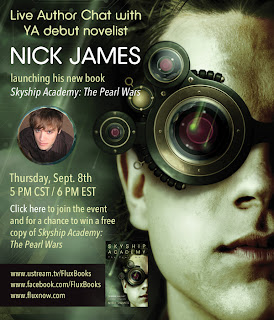 Do You Have What It Takes?

In the book, the only children admitted to the Academy are Pearl Agents’ kids or transfers from other training facilities, so they aren’t exactly given a choice about their placement.  You, on the other hand, would have to enter as an unknown quantity. Find out if you’d be admitted after answering these seven questions!

A. I’m sympathetic to them.
B. I don’t like what they stand for, but I don’t understand why we have to fight with them.
C. They scare me.
D. I strongly disagree with their policies and would like to help fight against them.

2. The Hernandez Treaty declares unauthorized travel across the International Skyline illegal. On Pearl missions, you will have to cross this line. Select the answer that best describes your feelings on this.

3. As a member of the Academy, you will spend the vast majority of your time onboard our ship, only permitted to leave on Academy-approved outings. How do you think you would deal with this?

A. I would feel like I needed to escape constantly.
B. Sometimes I’d get a little depressed about it.
C. I think I’d mostly do alright.
D. I can’t wait to spend all of my time onboard.

4. While you will be schooled from a young age, actual Pearl Agent training begins in Year Nine and lasts until Graduation at the end of Year Twelve. How do you feel about this schedule?

5. All students and staff are answerable to Captain Alkine, our ship’s commander. How do you deal with authority?

A. I can’t deal with authority at all.
B. Sometimes I argue, but I usually go along with what they say.
C. I don’t like it, but I always follow directions.
D. I will never disobey an order.

6. Skyship Academy must appear to outsiders as a normal college. As such, every school term the ship hosts a Visitation Day, where all staff and students must assume the guise of ordinary students. How do you think you would deal with this?

A. I can’t lie like that.
B. I would hate it, but I’d follow the rules.
C. I’d do my best, but there will bound to be a couple of slip-ups.
D. I have no qualms about carrying out such a plan.

7. Finally, Pearls are a relatively new and controversial energy source. Here at the Academy, we strive to not only capture them but also to study them. What is your philosophy regarding Pearls?

A. I think it’s extremely dangerous to be putting trust in something we don’t fully understand.
B. They make me nervous, but I understand why they are necessary.
C. I have no problem with Pearls, but the thought of fighting for them scares me.
D. I’m so glad we have Pearls to power our ships and cities.

4-7: Stay far away from the Academy. In fact, maybe you should go to the Surface and talk to the Unified Party.
8-14: You’d probably be better off on one of the residential ships. The Academy would be too much for you.
15-22: We’d invite you onboard provisionally, but it’s going to be a tough road. You’ll need to work very hard.
23-28: When can we sign you up?

Posted by Gabrielle Carolina at 12:01 AM

Thank you thank you. So sad that I'll be at work during the streamed chat. Thanks for the good run - I enjoyed gathering the clues.